Can we take credit for this? 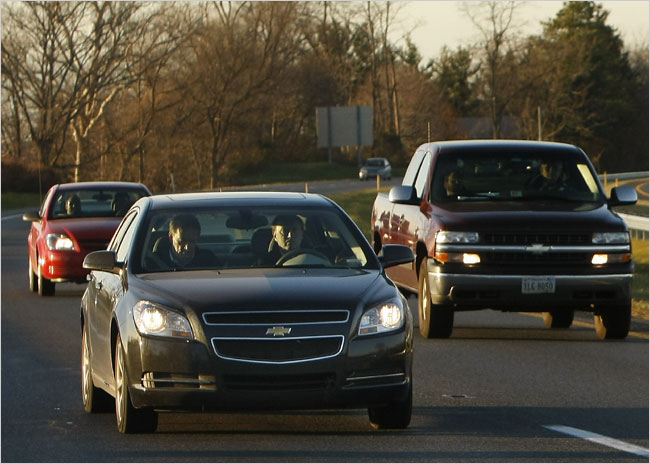 That’s GM CEO Rick Wagoner (in the passenger seat, or “at left,” as they teach us on the copy desk), en route to Washington in a Chevy Malibu hybrid. Original story here. Original suggestion, by our own J.C. Burns, here, although the idea makes so much sense it may well be one of those cases of simultaneous light bulbs. As I reread J.C.’s comment, though, his is much better than a simple driving stunt:

Yeah, if I were doing PR for GM/Ford/Chrysler, I’d turn it into an event…put all three of them in a hybrid SUV and let them roll down the Ohio and Pennsylvania Turnpikes to DC, doing press avails by cell phone, stopping for mini news conferences at truckstops, and rolling triumphantly (with live shots) into the Capitol area. In the back seat: a UAW employee from each.

“These are the people you’re affecting. We’re just their drivers.”

I still think that’s a great idea. Put Wagoner behind the wheel, and hell yes, live shots. That’s what they do at the auto show every year. Have the Chrysler guy drive his Jeep up the Capitol steps, like they did at the Pontchartrain Hotel a few years back. Do something dramatic, anyway. It wasn’t so long ago that Detroit designs had mojo — do you see rappers customizing Hondas with hydraulics and rims? Do 45-year-old men wake up one day with an all-consuming lust for a vintage Datsun 210? Confidence, gents — get a little of it back. Honk the horn when you roll into D.C.! Turn on the four-ways! Have some fun! Stand up and tell ’em you’re from Detroit!

While we’re on the subject of J.C. luv, I found this in the comments of his wife Sammy’s blog — you following? It’s a recollection by the former editor of The Country Journal, a small weekly J.C. worked for in the 1970s, way up in Plainfield, Vermont:

My favorite J.C. memory involves sending him to Cabot to get a story — any story, so long as Cabot people were in the paper, because if they weren’t, no one in Cabot would buy a copy. All J.C. could find was adult night at the school gym, where basketball was in progress. He wrote a story that consisted almost entirely of the sounds of the game (THA-DUMP,THA-DUMP, THUNK! CLUNK-CLUNK … “Hey!” “Here!” “One More!” “All right, Harv!” “Hwup!” “Oh!” “Ow!” “I’m sorry!”). Classic.

David Mamet lives there now. I hear he was attracted by the quality of the local media.

OK, then. Thursday is the end of my week, more or less. Lately I have a standing Friday work-related thing, but mostly Thursday feels like Friday, and since the sun’s out today — for the first time in days — it feels a little special. No bad news allowed, today. Thanks to Brian for pointing out the overlooked story of the week, about a soured co-operative effort between the Cincinnati Zoo and the nearby Creation Museum:

The Cincinnati Zoo and the Creation Museum launched a joint promotional deal last week to draw attention to their holiday attractions.

It worked, but not the way zoo and museum officials had hoped.

The zoo pulled out of the deal Monday after receiving dozens of angry calls and e-mails about the partnership, which offered reduced prices to anyone who bought tickets to the zoo’s Festival of Lights and the museum’s Christmas celebration, Bethlehem’s Blessing.

I mean, speaking of tone-deaf. How could an institution with at least one or two actual scientists reporting for work on a daily basis dream up something this dumb?

Others said a scientific institution shouldn’t link itself to a place that argues man once lived side by side with dinosaurs. “They seem like diametrically opposed institutions,” said Dr. James Leach, a Cincinnati radiologist who e-mailed zoo officials about his concerns. “The Cincinnati Zoo is one of this city’s treasures. The Creation Museum is an international laughingstock.”

Yeah, that’s one way to describe it. John Scalzi’s account of his 2007 visit remains the foundational text, however. The LOL Creashun thread is just for grins.

Someone asked me last night, “What’s the difference between the stuff you write and then this thing you call ‘bloggage’?” I said, well, I tend to write a little column-y piece with few or no links, followed by a few linky/comment sorts of things, but he didn’t see it that way, and maybe I’m just fooling myself, maybe that’s not the structure these daily entries take anymore. Maybe we’ve become an all-bloggage blog without even noticing. Whatever. It’s time to go to the gym. My thighs are a much bigger problem.

Posted at 9:47 am in Current events, Detroit life |