We get some ink.

Welcome to any new readers we might have today. NN.C got a little old-media pub Thursday, in Ben Burns’ column in the Grosse Pointe News. He did not let slip our secret that we’re really Not the Right Sort to be Pointers, but did get a quip in:

Nancy Nall Derringer, who has a last name that sounds like a 1930’s bank robber, freelances for a variety of local magazines and publications both on the Internet and beyond. And her lance is always sharp.

When I leave my name with secretaries and receptionists, I sometimes say “Derringer, like the gun.” As tiny two-round pistols that can be tucked into a lady’s garter have ceded their popularity to MAC-10 machine pistols, only a few pick up on the reference. The rest say, “OK, Miss Dillinger,” and leave it at that. Nice to know my married name is still ringing the old bells.

I’d link to the story, but you have to be a subscriber to the dead-tree paper to read the website. And I suspect hardly anyone here is. But welcome to any newbies it scared up. Feel free to join our raucous discussions in the comments. First-time commenters go to a holding pen, but once I’m satisfied you’re not a spammer, you’re approved forever after.

Anyway, that story wasn’t the most interesting thing in the paper yesterday. This was, a display ad in the classified section:

I am requesting your assistance in recovering a GOLD FABERGE EGG ENCRUSTED WITH JEWELS approximately 8 inches tall, attached to a wooden base, valued at over $6,000. The aforementioned egg was taken from a home on Lake Shore Drive, during an underage house party. The subjects that stole the egg along with other jewelry, stated that the ‘egg was thrown from a car window,’ while at a stop sign at southbound Wedgewood at Roslyn, November 12, 2007.

If you have any information, please call…

If I were the editor, I’d hand this ad to my best reporter and tell him or her to go fetch me a story, but I’ve given up expecting such initiative from the local press. Nevertheless, I appreciate their publicity.

In case you’re wondering, we got a few inches of snow overnight, making a search of the Wedgewood/Roslyn intersection problematic today. Anyway, I’m sure it’s long gone. What a thing to find on your dog-walking route. Life imitates “Risky Business.”

(It goes without saying that this was a Faberge-style egg, but that’s just a quibble. There are only about 60 authentic Faberge eggs extant in the world today, and their individual value is in the millions, not six grand.)

It’s still snowing, but no day off for Grosse Pointe schoolchildren, who, like the mayor of Detroit, generally get to school in chauffeured late-model SUVs. It’s a good day for shooting some video, as was yesterday, when the storm was coming. Early afternoon, it was very cold and very clear, so I went for a walk down by the lake and found the ice at our city park as solid as my kitchen floor, making wonderful groaning noises farther out. I had my video camera, so I crept out as far as I dared and tried to capture it. The crews cutting limbs at the Ford estate took a short break, so there was no chain saw noise to ruin the effect. I was thinking of shooting something like the last five minutes on “CBS Sunday Morning,” but once I got out far enough, the groaning stopped. Dammit. So I looked at some swans, trespassed a little on the Ford grounds, and turned back.

The bad news: The water level in the lake is as low as it was in the fall. Maybe lower. We could get three feet of snow today, and it wouldn’t be enough.

So what’s going on out in the big world? It seems the wind is changing. Isn’t it funny, how one day you just wake up in August and realize that fall is nearly here? Today…well, let’s call it Strange New Respect Day. Republicans are reconciling themselves to McCain. Hillary and Obama are making nice to one another. The next phase has begun, and it’s only Feb. 1. The race for the nomination will be effectively over after Tuesday (I suspect), and then we can start focusing on November.

By the way, if there was any doubt Stephen Colbert was a comic genius, it was gone when he pegged Mitt Romney to Guy Smiley: 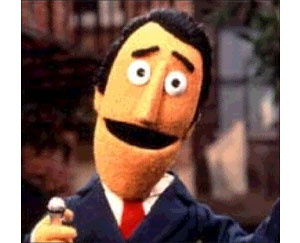 (“Sesame Street” is so far past its peak it’s not even worth discussing, but it’s useful to remember the early years, when Jim Henson’s genius still infused the Muppet troupe. From Muppet Wiki: When Count von Count introduced himself in a Beat the Time sketch in his traditional way, “They call me the Count because I love to count things,” Guy responded with, “Well, I’m Guy Smiley. They call me Guy Smiley because I changed my name from Bernie Liederkrantz.”

Bloggage: I’ve always wondered how the downturn in newspapers’ fortunes is playing out in Europe, particularly the U.K., which publishes the liveliest papers in the English-speaking world. Give a smart writer a simple assignment — a general piece on men’s underwear — and watch her run:

Come the Renaissance, as the chausses became tight hose, the braies got shorter and were fitted with a convenient flap for urinating through. That buttoned or tied flap – the earliest codpiece – wasn’t actually covered by outer layers, so Henry VIII, never one for modesty, began to pad his. Historians have suggested that beneath Henry’s appendage may have been hidden the medication-soaked bandages needed to relieve the symptoms of his syphilis. Men free of venereal disease, meanwhile, used the tumescent codpieces as a handy pocket. (“New World cigarette?” “Ah, not for me, my lord, no.”)

Among the things I learned from that article, besides the disgusting one about Henry VIII’s syphilis: Brit slang for undies includes “smalls,” “y-fronts” and just plain “pants” (distinguished from trousers). Also, “there is one delicate area of pant advancement where men are not yet ready to go – universal package sizing.” Because no man wants to go into a department store and be spotted buying the masculine equivalent of a 32A.

What Gannett is Doing to the Free Press is a standard small-talk discussion among Detroit journalists since the paper’s sale two years ago, but to me, it all comes down to the Tips Box, the Gannett trademark, you-are-too-stupid-to-live-your-life feature tacked on to too many stories. With a big winter storm overnight, there’s a huge Tips feature in today’s paper. Among the tips: Protect your lungs from extremely cold air by covering your mouth when outdoors. Try not to speak unless absolutely necessary. Roger that, sir!

It seems a fitting note to shove off for the weekend on. Try not to speak unless absolutely necessary.