I talked to JohnC yesterday, who also lives in the Pointes, and he said he was about to send me an e-mail passing along the latest civic rumor: That soon-to-be-ex-mayor Kwame Kilpatrick had closed on a house in Grosse Pointe Shores, at a two-digit number — i.e., close to the lake — on Oxford Road. John’s a reporter too, and we batted around the possibility this was true before deciding it probably wasn’t. He doesn’t have that kind of money (the house is $1.5 million), no one would lend him that kind of money, leaving the city of Detroit would send the wrong message to the constituency he hopes to lead again one day and, finally, it just didn’t pass the smell test. It dovetails a little too neatly with some Pointers’ need to believe everyone wants to live in the 48236, and of course it rings the lizard-brain bell about the Threatening Negro come to disrupt the peace in Whiteville.

The Pointes haven’t been all-white for a couple of generations, but they’re pretty white. There are affluent African Americans here and there, but not in any kind of significant numbers. A black family of the Kilpatricks’ demographic and education wouldn’t raise eyebrows, but Kilpatrick himself would raise them, believe me. It’s hard to describe how spittle-flecked the loathing of him is in the suburbs, which always seemed a waste of energy to me. While it’s true his administration has been a disaster, a virtual carnival of pocket-lining and perjury, the specific objection to him suggests things would be different, and better, with a new mayor, and that I’m not sure of. What’s going on in Detroit, what was going on before Kilpatrick and will continue later, isn’t administration as much as it’s looting. It’s a brutal comparison, but to me you could change the name Kilpatrick to Duvalier, and get a pretty rough parallel.

Anyway, the media checked out the rumor and confirmed our suspicion: No sale.

Let’s deal further in ethnic stereotypes, shall we? I was struck by this photo from the New York Times today. This man is evacuating ahead of Hurricane Ike: 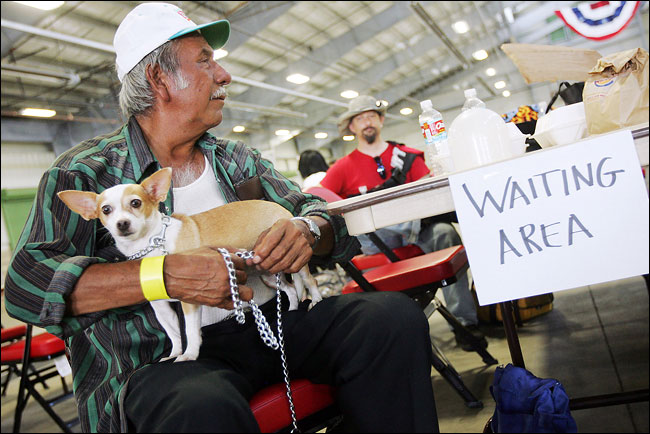 Story here. His name is Juan Rodriguez, which I assume in a Texas Gulf Coast resident suggests Mexican heritage, and he owns a chihuahua. Does your dog share your ethnic heritage? Do dogs share any part of their human equivalent’s ethnic stereotype? It’s hard not to see Deutschland’s personality in its German shepherds and Rottweilers, but what France has to do with French bulldogs remains a mystery to me — although, now that I think about it, a French bulldog is generally more fashionable than its English equivalent.

Ah, Friday. Time to clean the house. Any bloggage? Not much, but this:

Roger Ebert, my hero. Are all New York Post writers thugs? Or is this just indicative of the mood at overstuffed, overhyped film festivals?

Have a good weekend, all.

UPDATE: Speaking of chihuahuas, I need to add a link to this, one of my favorite commercials ever. (Embedding is disabled, alas.) It’s from the short-lived Viva Gorditas campaign, and I loved it because, in the late 1990s, it referenced a whole lot of things that were already far out of date and way over the heads of the target Taco Bell demographic, i.e., teenage boys. The classic banana-republic, ruler-who-speaks-from-a-balcony tropes — the red banners, the cheering crowds, the tinny speakers mounted on a pole, the old-fashioned microphone, Che’s beret — just cracked me up. I notice this version is 22 seconds, an odd length, and I recall one that ended with an image right out of a Soviet May Day poster, with the dog leading the cheering crowd down a dike or embankment, with farm fields spreading out to the side, while three jets pass in formation overhead. How on earth did they sell that one to corporate?

When we were in Argentina, and were taken through Evita’s Casa Roja, I longed to step out on the balcony, cup my hand in a wave, and call out, “Viva Gorditas.” Because that’s just the sort of ugly American I am.