A few of my favorite things.

When the bad news piles up, it’s tempting to brood, but today let’s give ourselves a break, shall we? All is not lost. There are even pleasures to be had in bad times, as last night, on the phone with my sister, when she let loose with a short list of punishments she’d like to see visited on Bernard Madoff:

Me: The Wayne County Jail!

Yeah, that’s a good one. And I’d like to see his kids go there, too. And his wife, and…

Actually, I think the Scourging of the Wall Streeters would not only be a totally excellent reality show, I think that if Barack Obama made it a centerpiece of his inaugural ball, we could go ahead and start carving him on Mt. Rushmore now.

So let’s pause and just throw a little credit and praise around the room, shall we? Let’s start with this week’s Metro Times, where the horribly bylined “Detroitblogger John” has another gem, about one of the many Detroit storefronts that have become private hangouts. It’s one of the unique features of this city, with so many empty buildings and cheap real estate, that it costs practically nothing to claim a little commercial space as your own. I first noticed this when I wrote a (very bad, but that wasn’t entirely my fault) story on one of the city’s bid whist clubs, where members gather twice a week to play cards. The MT story is on the Chip-in Sportsmen’s Club on Seven Mile, home to a group of retired autoworkers who’d rather hang with their friends than hang at home, and are willing to pay a modest fee to do so:

Dues are $35 a month, plus $6 for Mega Millions lottery tickets bought by the club. Members are entitled to a key and free access anytime, including two private parties a year. They throw a Christmas Eve bash and a fish fry now and then, and grow a garden out back, giving the vegetables to folks in the neighborhood in the fall. On warm summer afternoons they’ll line chairs out front and watch as traffic passes by and the day winds along.

Detroitblog publishes in the Metro Times, and later in the day posts the same story on his own website, with additional photos. So, in keeping with what we’ve been talking about of late, read the story on the MT link above, and then, if you like, check out the extra pix here.

Everyone must be in a mellow mood today. Check out the Bush twins in People, via New York magazine:

People: Barbara, Jenna, any advice for Sasha and Malia Obama?
Jenna: Well, they’re a lot younger than we are, cuter than we are. We’re old news.
Barbara: Even the puppy is going to be cuter.

A puppy cuter than you, Barbara? It doesn’t exist!

Finally, let’s forget our economic troubles and turn our focus to something that really matters — redecorating the White House — especially when it gives us an excuse to link to this picture: 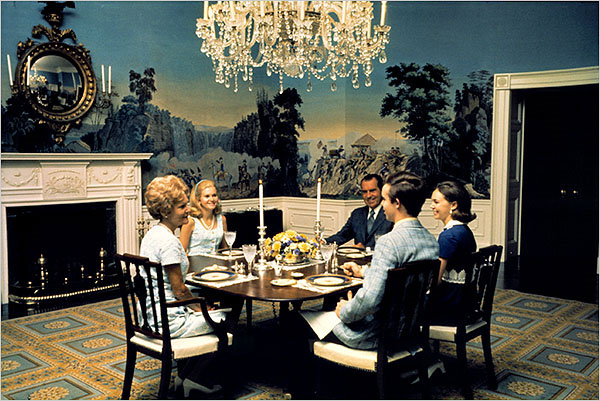 Kids, the ’60s were real, and they happened for a reason. See above.

Off to relieve stress. Back later.

Posted at 9:45 am in Current events, Detroit life, Media |

64 responses to “A few of my favorite things.”