If it’s Monday, it must be time for the Grosse Pointe North High School Cardboard Boat Regatta of 2014, now in its third or fourth year, always with new rules. This year’s were:

Cardboard and duct tape only for construction materials, with duct tape only along seams — no wrapping for stiffening. This year they were also warned not to try anything too fancy; evidently last year some group of wiseasses launched an enormous craft that had a second dinghy concealed onboard. They got to the far wall of the pool and launched the second boat — I’m imagining they were going for some sort of low-rent James Bond effect — and the whole thing sank. Stuff was sucked into the pool’s filtration system, the custodians were furious, and stern warnings were issued.

This, then, was Kate’s team’s entry. It was called the Poseidon, after all rejected Alan’s suggestion (Box of Rain):

Very utilitarian. Of course, Alan knows boats — not uncommon in a lakeside community full of sailors — and helped with construction, but his major contribution was to suggest the cardboard mailing tubes for gunwales and bulkhead stiffeners. No one else did it quite the same, but quite a few teams used tubes in other capacities; one made a pontoon out of cardboard post-hole forms, stuck a box on top, paddled it up and back, and scored the A. It wasn’t as pretty as Poseidon, but it worked.

Another rule: Two paddlers. Here they are, ready to launch:

I was concerned about the lack of freeboard, but it had a triple-layer bottom and the girls were able to paddle it while sitting flat on their fannies. If they’d ever done it together and maybe been better-matched, I think they could have won their heat. As it was, I think Kate dug in too hard and they got fouled up in the lane dividers. They didn’t get the big bonus for the win, but if your craft made it up and back without sinking or capsizing, you got the A. They did:

Others weren’t so lucky. A few sank at the dock, so to speak, and others capsized or went down mid-voyage. I think Poseidon could have done a few more laps easily, but upon completion, everything went into a special dumpster parked outside. Lessons learned:

And now I think we’re done with these projects for a while. It doesn’t get more exciting than this, unless they build a rocket ship. (Kate’s taking astronomy next year; her school has, no shit, a radio telescope. Senior year, when the electives really become important, should be the best of the lot. We’ll see.)

And with that, I have to get to work on another extracurricular project, a grant application for a friend. So I leave you with this, which someone sent me today. It gives me hope, because obviously I wasn’t the only person who found Mitch Albom’s column yesterday ridiculous: 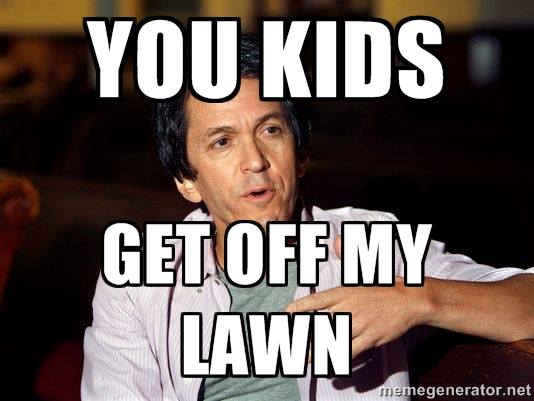 I would have made it “young person” instead. Stop listening to that Lady Geegaw, young person! The Beatles were better!